Dueling Axes axe-throwing lounge in Downtown Columbus will celebrate its one-year anniversary on July 7. In celebration, the lounge announces an expansion into New Albany, as well as a tournament series and other promotions.

The lounge will expand to New Albany as part of the Hamilton Quarter expansion southeast of Hamilton and 161. The development is also the future site of a Target Next Generation store, Hobby Lobby, and a host of other retail businesses and restaurants.

Dueling Axes’ expansion will double the size of its Downtown location — which will allow for twice as many lanes, but with the same rustic feel. The space will also include a private meeting room and a traditional parking lot.

The lounge is looking at an opening in 2020.

“That kind of opens up a new market for us, that northeast side of Columbus,” said Jess Hellmich, co-owner of Dueling Axes. “There’s a whole group of people that only stay Downtown or inside 270. And then there’s a whole group that don’t want anything to do with Downtown.”

A part of Dueling Axes’ formal one-year anniversary celebration is a set of 32-person, bracket-style tournaments on three nights in July. For a $20 fee, individuals can compete for one of six spots in the finals. The winner will get tickets to a Columbus Clippers game, and get the chance to make the “first axe throw” ahead of the game.

“Instead of your first pitch, we’re going to set up a target and someone’s going to be able to throw an ax over home plate,” explains Hellmich.

Tickets will also be given away, as well as company merch, restaurant gift cards and gift certificates to the lounge.

The celebration also incorporates a number of promotions, including summer happy hour pricing on Wednesdays, Thursdays and Sundays through Labor Day. On Sunday, July 7, the day of the anniversary, one-hour reservations will cost $10 a person for a minimum of four-person groups.

Hellmich and Paul Sherry, co-owner of Dueling Axes, say the past year has gone by quickly. They now have 10 people on staff, and the response from patrons has exceeded expectations.

“No injuries. Two splinters, I suppose,” said Sherry. “Most people come in, they pick it up right away.”

“Coming in on a Saturday night and seeing a bunch of coolers in here, with people just having a good time. It’s something else,” said Hellmich. “You don’t see it in a lot of places.”

More information, including registration for the tournament, can be found online at theduelingaxes.com.

By Chelsea Wiley / Things To Do

How good is your axe throwing arm?

You can put it to the test at the first ever public axe throwing tournament hosted by Dueling Axes. The company is celebrating their one year anniversary with a 32-person double elimination tournament which will kick off on July 11. Every Thursday throughout July at 6:30, participants will be able to see just how good they are at chucking axes at the wall! The championship will take place on August 1 and the winner of the tournament will get to throw the first pitch at a Clippers home game on August 19. Oh, did we mention that instead of throwing a ball, the winner will obviously be tossing an axe!

Tickets are $20/tournament and participants are allowed to compete on multiple dates. For more info, or to sign up for the tournament, please click here. 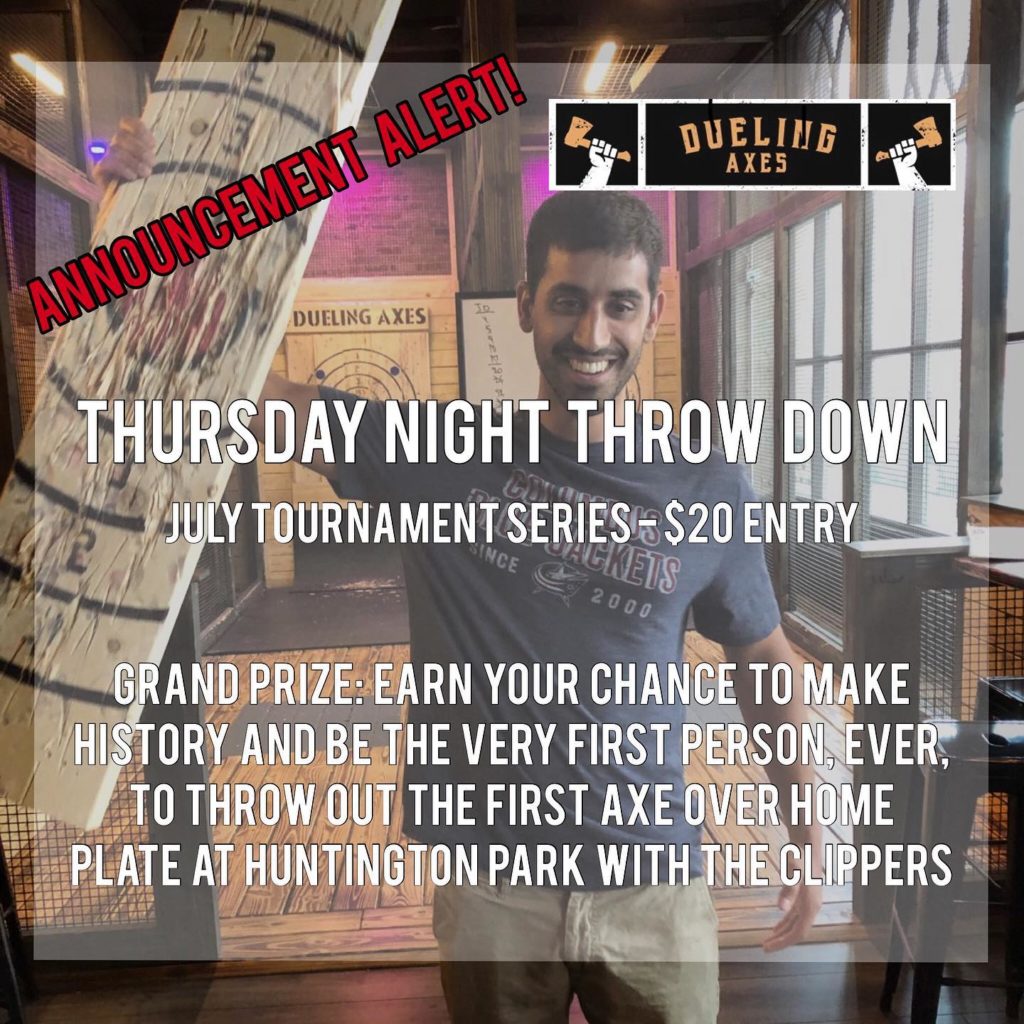