How Throwing An Axe Can Bring Your Team Closer Together

Every so often, the boss rallies the troops and the office gets together to do a little team building. But what do these off-site events actually do for the team?

Sometimes, they entail working together to find a common solution, smiling for a photo at the end and having a little fun along the way. But other times, they fall flat. Employees become disengaged. They start thinking about all the other things they could be doing with this time. While the main goal is to get your team to socialize, build bonds, think together and decompress, the end result can be quite the opposite.

If you want a team-building exercise that will truly engage your team and become a memory they talk about for years to come, you might want to start thinking outside the box – and down the lane.

The Effectiveness of Thinking Outside the Box 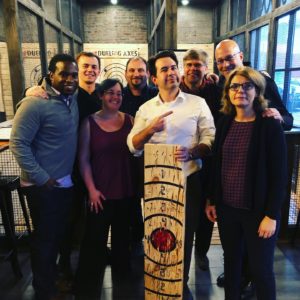 When your team catches wind of an upcoming team-building event, the last thing you want to hear in response is a chorus of drones or the disheartening “ugh, we’ve already done that.” The word “workshop” can evoke feelings of “please don’t make me.” This is supposed to be a good time, not a long, drawn out, cringy affair!

Playing “three truths and one lie” loses its luster, scavenger hunts only work if everyone is invested and seeing which group can solve a puzzle the fastest is only fun for the winner. It’s time to do something different with your squad. It’s time to throw an axe!

Because axe throwing is still a relatively new concept to a lot of folks and will certainly catch them off-guard in the best way. When you hear “team building workshop,” you don’t think throwing an axe at a target – and that’s exactly the point. Pique interest. Throw axes. Get competitive. Watch your team thrive as they aim to smash the bullseye!

You Don’t Need a Leader of the Pack

Team building exercises are designed to bring people together – but they can also push people apart or even alienate some team members, especially if the normal cast of leaders starts to take too much control. The beauty of axe throwing is that it’s an individual’s game that’s unfamiliar to most people. This mitigates the risk of forming cliques and gives everyone the chance to be the best instead of just falling in line. Everyone is learning together, while still trying to outperform each other. And, even if you’re not that great, there’s no pressure because it’s your first time!

Get Out Of The Office & Step Down the Lane 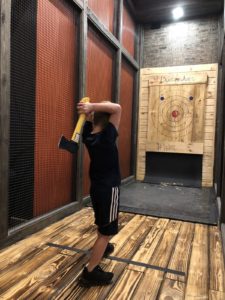 When your team gets together to throw axes down a lane, they’re not worried about work. They’re all trying to catch on faster than the next person to see who can throw an axe the best, while sipping a beer and eating pizza. It doesn’t get much better than that during or after office hours! This is exactly the type of thing they’ll post on their Instagram and talk about with their friends.

Team-building exercises don’t always have to bring people together in the conventional sense. You can get the same effect with some healthy, fun competition, especially if no one on your team is already an expert axe thrower! You’re focusing on how you can better your own throw and discussing newfound techniques with coworkers, all while realizing Jane from Accounting has a freaking cannon for an arm.

Get out of your office and out of those stereotypical team-building exercises and step down a lane. Dueling Axes can host events as large as 120 people and allows catered food/drinks. Book your next out of the ordinary corporate team event today!