at Dueling Axes, Thursday’s in July

Enter for your chance to win the grand prize of throwing the first-ever, first axe throw over home plate at Huntington Park with the Clippers 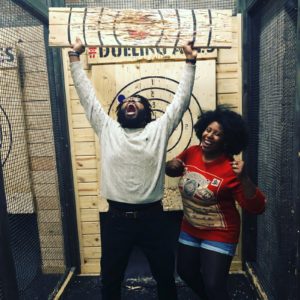 You read it right! The winner of this tournament series will win the right to throw the FIRST AXE THROW OVER HOME PLATE at Huntington Park on Monday, August 19 (Dime a Dog Night). This July, Dueling Axes will be hosting four axe throwing tournaments on Thursday nights. You will be playing for your right to represent Dueling Axes in a history-making, first-of-its-kind, FIRST AXE THROW OVER HOME PLATE on the evening of Monday, August 19.  All participants will have the chance to win Dueling Axes swag, local sporting events tickets, restaurant gift cards and more. Official sign up is now open and will be available on a first come, first serve basis. Entries into multiple tournament dates is allowed, however, each participant can only qualify for the championship once. If you are interested in participating in this tournament series, sign up now! For more information regarding the tournament series, see below: