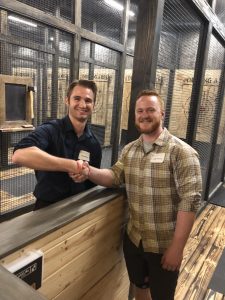 Our goal is to promote competition through sportsmanship and fair play. Our leagues/events should be played in a sportsmanship-like manner. Although competition may become intense, we expect our participants to maintain a high degree of sportsmanship up to and after the final throw. As a participant in any Dueling Axes tournament or event, you must pledge to:

Sports are filled with judgment calls and, as a result, disputes between players, opponents, and staff may occur from time to time. However, it is important that participants respect and handle all disputes that may occur in a civilized manner. No one may argue/protest a call made by an official. Protests for player eligibility or rule misapplications/misinterpretations are time-sensitive and must be made before the next throw. All decisions made by on-site Dueling Axes Officials must be respected and obeyed. Any feedback regarding rules, players, officials, or staff members should be brought to the attention of management during normal business hours in written form. Any behavior deemed unacceptable by management may result in a verbal warning, ejection, suspension, and/or expulsion as outlined below. Repeated Code of Conduct violations by the same player or team could result in an expulsion from the league without refunds. All Code of Conduct violations during and outside of matches will result in disciplinary measures.

A league official is not required to follow disciplinary measures in this order.